You are here: Home / Williston Small Business / Something Smells Funny in Williston. Why You Should Care about Hula Grill.

There is a story brewing in Williston and by now, many have already gotten a whiff of the story. Literally.

Hula Grill has been serving up their style of BBQ for about three months now. Their restaurant located on Main Street has received better than average reviews since it opened. In fact, the reviews are great. The owners are gracious and have gone out of their way to make Williston their home. These are the type of people that Williston should want. It seems the people agree. It also seems that the City of Williston doesn’t much care what the citizens think about this.

I have long talked about the irony that Williston operates under. Keep the town quaint and small or help it grow and prosper. In this, the city has had a bit of a reputation problem. The astronomical housing prices and cost of living are an impediment to attracting families and businesses long term. And you need families. You need business. When things slow down, which is happening now, those families need a reason to stay. When you’re running a business, it’s important to know the city has your back.

When Hula Grill found itself the target of a complaint, the owners were quick to try to resolve this. It seems the business located behind Hula Grill, one Ritter Laber & Associates was tired of smelling Teriyaki Chicken. Yep, that’s what is really at issue here. You see Hula Grill’s vent points toward their business. When they moved into the location on Main Street, everything passed code. Everything was approved, even the vent. However, if a businesses is deemed a public nuisance, it appears they can suddenly change their mind. Sweet.

The owners of Hula Grill agreed to move the vent to the roof. Unfortunately for them, they underestimated the cost of doing this. They also underestimated the time it would take to get it done. They were given 30 days and an extension would only be granted if the person who made the original complaint agreed to it. The owner of Hula Grill tried to talk to them. I’ll give you one guess as to how that turned out.

The sign posted on the door reads as follows:

“Section 5-267 (9) of the city of Williston code of ordinances provides that for purposes of public safety an unsafe building must be ordered vacated.”

Wow. That must be some powerful  grilling.

How is it that the Mayor (who by the way says he can do nothing) is allowing one person that kind of power over any business? When there is a good faith effort from Hula Grill, why won’t the city also show a good faith effort in a resolution? We are not talking about health code violations here. This is a business that has a positive impact on the community. Regardless of whether or not you like their food, you have to ask yourself, what harm are they causing? What have they done that is so detrimental that they cannot remain open while working to get this issue fixed?

Oh wait, they cooked on the grill and it made an offensive smell.

Why would the city move to take action against a business and cause it financial harm if the intent was not to get rid of the business all together? Mr. Ritter, the person who complained (Ritter Laber & Associates) will not suffer financially while the situation is remedied. It’s JUST GRILLED FOOD! The Mayor should understand that this will allow all other businesses within smelling distance of a restaurant to complain and shut them down. This situation is so absurd I have a hard time wrapping my brain around this.

Unable to come to a resolution on this with the city, Hula Grill hired an attorney and asked the court to issue a restraining order against the city in order to keep their doors open. They cited four reasons for this request:

The court agreed and issued a temporary restraining order. From this point there will be a hearing in a few weeks where each side can present their side to the court.

Now I ask you this, why is this necessary? North Dakota is about good will and doing the right thing. It’s about hard work and good values. You expect your ELECTED leaders to have these qualities. Regardless of how you landed in Williston this is an issue you should care about. This is how your city leaders are spending their time and your tax dollars. If you want to get involved there are a few things you can do. 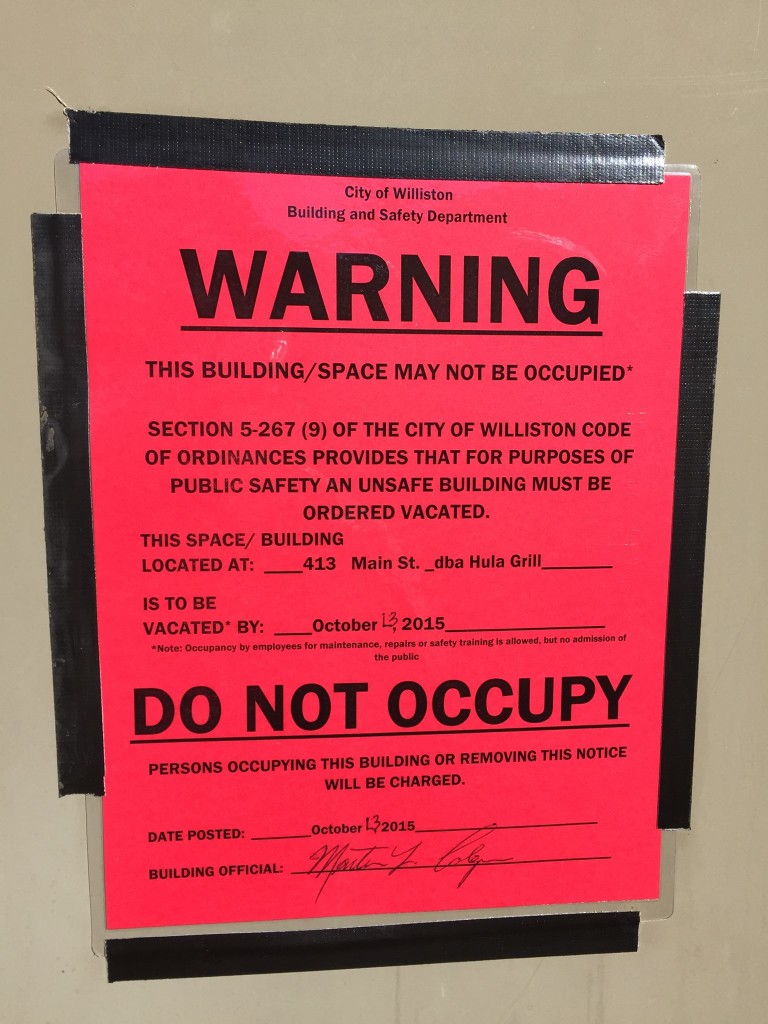