You are here: Home / Featured posts / Failure is NOT an Option

My day started like any other day. Little did I know that on this day the course of my life would change in a direction that I hadn’t quite expected. My husband came home from work one day loaded down with more work gear than normal. I knew the moment he looked at me what he was going to say. 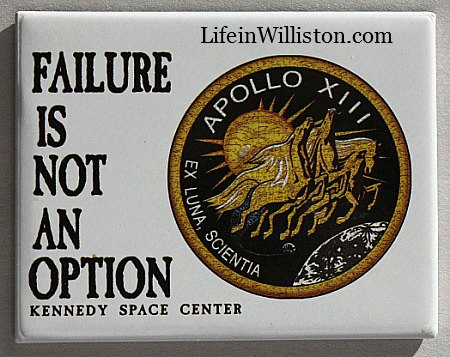 “They kicked me down the road” he told me. I wasn’t surprised. We had sort of been expecting it. The guy he worked for is truly a world class idiot and had been going through employees quicker than he could replace them. He had no idea how to run that plant and his employees had no respect for him. Yet he remained. He ran that plant in a way that brought worker morale down. Unlike here, it was not so easy to just run out and find another job. You had to covet what you had. And so, my husband did just that, until he was no longer allowed.

He told me a few days later that he felt as if he were at a crossroad. On the one hand, he could continue on the same path (albeit with another company) making the same wage and struggling month after month knowing full well that one disaster would sink us, or on the other hand, take a chance on North Dakota. We had heard about it before, the “myth” that was North Dakota and the money you could make. However, hearing about it and actually picking up and going are two very different things. My point of view was simple. Go. Go now. If you don’t, you will always wonder if you missed an opportunity. For me that was the only choice to make. Even if it didn’t work out, we would still be in the same position. He really had nothing to lose.

One of the many great things about my husband is that he’s a networker. He is a people person. It’s hard not to like him. He would do just about anything for you and in return people have always been willing to go the extra mile for him. It was through one of these contacts that he managed to find someone that offered him a room to stay in when he got to North Dakota. He could stay as long as he needed until he got on his feet. No charge. That was miracle number one.

So we started putting things in order because I knew if he went he would likely be employed soon and wouldn’t be back. I also knew that since he had lost his job, we did not have the money for a road trip. He would have to drive, he needed his vehicle. He was going with the understanding that he would do absolutely everything it took to make it work and so he went with the expectation of finding work and beginning immediately. Failure was NOT an option. A trip like this, 2,500 miles is not cheap. He would need to make some minor repairs on his vehicle and have money for places to stay along the way and what he needed when he got there.

I sold my diamond ring to help make this happen. Being the good man that he is, he of course said no. I said yes. I reasoned with him that selling the ring was simply a means to an end and if it worked out, he would have the opportunity to replace it PLUS he was welcome to replace it with something bigger if he so desired. He agreed. Miracle two.

With plans in motion we spent the next week just trying to get a few things in order and trying to decide what he would need most as we knew winter was right around the corner. He began applying online to places he felt were a good fit and networking with anyone he could. He made a few “friends” this way, over the phone that would later serve him well. Never discount the power of networking (and I don’t mean facebook!). He called supervisors and left messages with those in charge of hiring. He kept notes, wrote down names and starting pulling together all the paperwork he might need to hire on somewhere. Certifications, an up to date resume, copies of his birth certificate and anything else he might need. He wanted to be prepared.

Secretly I was dreading him leaving. I knew he would be successful but the selfish side of me didn’t want to deal with what it all meant. We had a good size home, lots of stuff, a couple of kids under our roof…. what was I supposed to do with it all? We could barely afford this trip and still keep the household bills paid, how could we possibly pay for a move of this size? We briefly talked about staying and keeping our home there while he traveled back and forth. That lasted all of two minutes. We both knew that in order for this to work, we wanted to be together. I needed his support and he needed mine. There was no other option, we would have to find a way. Failure was not an option.

So he left early on a Saturday. It was still dark. He packed up his 20 year old Ford pickup truck, kissed me goodbye and headed to the big wide open. It took him three days of driving and he stopped twice to sleep. I worried the entire time. Not about him driving but about that little truck. I was not at all confident that it would make such a long trip. Make it he did and without incident. That little truck is still running strong. Miracle number three.