You are here: Home / Archives for Robin 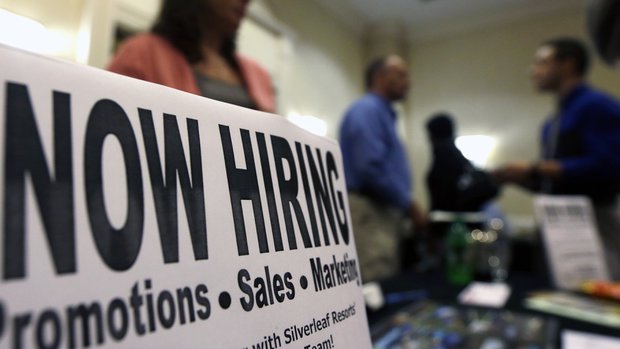 The BLS just released the Regional and State Employment and Unemployment figures for May 2015, and the figures are looking pretty ugly for North Dakota. North Dakota had the second-worst job losses of any state in the country, losing 5,500 jobs last month. This is especially bad considering that North Dakota has such a small population to begin with. This amounts to a loss of 1.1% of the state’s jobs in a single month. The number of jobs created in the last 12 months in North Dakota currently stands at just +3,500, a middling figure when compared to the roughly 20,000 jobs the state has been creating each year since 2010.

With the price of WTI oil currently standing at $59.37 as of July 19, 2015, the modest recovery in prices since the low of $47/barrel in March has done little to ameliorate the pain felt in states that are more dependent on oil for its economic fortunes. Louisiana has been hit particularly hard – its unemployment rate has risen to 6.6% from 5.9% a year earlier. North Dakota’s unemployment has risen from 2.7% to a still-low 3.1%, although a further rise in unemployment has been partially stemmed due to a loss of 2,900 people in the state’s official labor force in the past two months.
Many industries in North Dakota depend on the ever-increasing bounty of oil and gas extracted from the Bakken formation to ensure their continued survival and expansion. Retail, transportation and warehousing, manufacturing, construction – these industries in particular owe their flourishing growth to the infusion of people and industry into the region. While $60/barrel is not going to completely kill off drilling and fracking activity in the region, it will certainly slow it down. According to the weekly Baker Hughes oil rig count, the brunt of the fall in oil prices is being borne in the Permian Basin in Texas, where the breakeven point for drilling oil is higher. It remains to be seen how ell North Dakota can handle the steep drop in oil prices going forward.
Author: Logan Arias 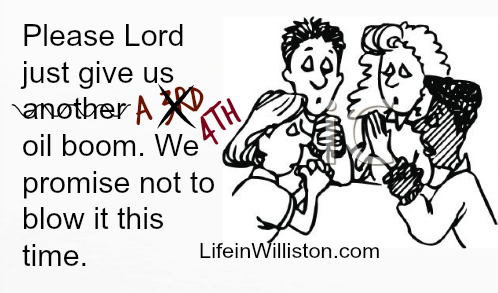 A friend of mine went home on rotation two weeks ago and came back with stories of gas that was $1.69 at the pump. This was in Missouri I think. We have been brainwashed into believing that low gas prices mean that jobs are at risk and wouldn’t you rather pay more at the pump (like three times more) to insure that a segment of this country stays employed? Those running the big fat oil companies (still collecting record breaking salaries and bonuses by the way) sit back and laugh as we fight amongst ourselves. END_OF_DOCUMENT_TOKEN_TO_BE_REPLACED

Feast or Famine. That’s the way I have seen our economy behave more or less since I’ve been a bill paying, responsible adult. Things have swung wildly for people and often through no fault of their own. So many people have come here to get out of that famine cycle and find a comfortable life again. END_OF_DOCUMENT_TOKEN_TO_BE_REPLACED

For the purposes of this post, I’m going to go Bakken wide here and not just pick on Williston. After being here for a few years I have come to accept that this area will never be what I want for food. END_OF_DOCUMENT_TOKEN_TO_BE_REPLACED

I’m going to preface all this nonsense by saying that I am not a perfect person. I don’t claim blogging to be some noble cause but it did help me to manage a particularly stressful time in my life. I also know for a FACT (since I know you like those) that it has helped others. END_OF_DOCUMENT_TOKEN_TO_BE_REPLACED

Although it seems to be what everyone is talking about, the elections on June 10th will decide more than just the Mayor’s seat. The school board seats and the Parks and Recreation are also two areas that deserve your time and consideration. END_OF_DOCUMENT_TOKEN_TO_BE_REPLACED